MJ is gone, but not forgotten

Today, the world lost one of the biggest musical icons to ever step foot on the planet: Michael Jackson, the man who taught the world to dance, has passed on to the great Neverland Ranch in the sky. His contribution to popular music is unmatched, and honestly, I don't think it ever will be. At age 50, I think he had a lot more music to give the world, but I guess we'll never know. All we do know, is that there will never be another. Noone will ever give as much to the world of music or be as universally worshiped as MJ was. In truth, however, he'll always stay with us because legends never die...

Petition the Nigerian Government to ReOpen The Shrine!

In an interview with Femi Kuti I previously published on my blog, I indicated the Nigerian Government had closed The Shrine, the home base performance space of Femi Kuti. The Shrine is still closed, and a petition is now being circulated to reopen it. Here's the petition, if you would like to sign it, go to this website.

To: the Governor of Lagos and the Nigeria’s Minister of Justice

THE NEW AFRIKA SHRINE, NIGERIA’S LAST BASTION OF LIBERTY, CLOSED BY THE AUTHORITIES

Throughout Africa today there are many western-style theatres, mainly built by the Chinese, Africa’s latest colonizers-in-waiting. But only rarely are they administered and operated as cultural centres, open and accessible to anyone other than the bourgeois minority in their SUV’s and Mercedes limos.

A notable exception to this rule existed in Lagos Nigeria until last week, that is, when it was forcibly closed by the authorities giving less than 24 hours notice and claiming “noise nuisance, illegal street trading, indiscriminate parking, blocking of access roads and obstruction of traffic” as their justification.

The New Afrika Shrine was built and operated by Femi and Yeni Anikulapo Kuti, the eldest son and daughter of cultural icon, Fela Anikulapo Kuti, who built the original Shrine in the seventies, which endured until shortly after his death in 1997 when it, too, was forcibly closed by the Nigerian authorities.

Both the old and new Shrines were much more than just music venues. They were a refuge for the homeless and dispossessed, acted as a focal point for dissent and were consequently a thorn in the flesh of the ruling elite. Fela used the stage to launch eloquently savage diatribes against the corruption and mismanagement that was rife in Nigeria, one of the world’s leading oil producing countries, and was a hero to millions for the biting, non-compromising social commentary contained within his lyrics. In the seventies and eighties people flocked to the Shrine to hear Fela’s latest harangue of the country’s leaders and marvel at the powerful music and spectacle produced by his singers, dancers and musicians. Millions, not just in Nigeria but across the African continent, bought his albums and his tours in Europe and America attracted huge audiences.

Fela paid the price for his brutally frank and widely publicized condemnations of the government and his fierce defense of human rights by being constantly harassed, arrested (more than 200 times) and often savagely beaten, none of which ever diminished the continuing force of his attacks.

Following his death and the forced closure of his beloved Shrine, Femi and Yeni resolved to re-build an even bigger venue on a nearby site and used their share of income from the global sale of Fela’s albums with which to do so. They were determined to maintain their Father’s legacy and considered the heritage of shelter, support and advocacy as being the most valuable contributions they could make towards the development and creation of a united and democratic African republic.

Against all the odds, and despite constant harassment from the authorities, they have successfully continued to the Shrine open for almost a decade and have developed a large and faithful following, as well as providing an effective refuge for disaffected youth and the dissemination of preventive information in defense against the Aids pandemic. Femi and his band, The Positive Force, have graced the stage and kept alive the spirit of dissent and social commentary as the backbone of his work. He and Yeni have acted as host to the ever-increasing number of world-renowned artists who have made the pilgrimage to the Shrine and participated in the Felabrations which take place each year on the anniversary of Fela’s birthday. Despite the global recognition of the Kuti family (a musical about Fela is about open on Broadway and a Hollywood film is being made of Fela’s life and work) and their work as three generations of social reformers, the authorities have maintained their opposition and have taken every opportunity to obstruct the continued operation of The Shrine. This has included countless raids, often in the middle of the night, including beatings and harassment of the many homeless youth who seek shelter there, now once again exposed to the elements.

Now, of course, The Shrine is closed, according to the authorities, permanently. However, after making this pronouncement in writing just a few days ago, they have this morning stated that it may re-open tomorrow. This can, alas, not be viewed as any kind of victory. On the contrary, that a ‘permanent’ closure can be turned around in less than a week only shows that their decision-making process is completely arbitrary. This cat and mouse game, which has been going on for almost four decades must come to an end. When Fela died, the upper echelons of Nigerian government sent letters to the family that were not simply expressions of condolence but were eloquent testimonials to a great man. The present authorities must finally admit that Fela Anikulapo Kuti is Nigeria’s best loved son and accept the earnest request made by the Executors of Fela’s Estate, Yeni, Femi and Kunle Anikulapo Kuti, to:


1. Once and for all end hostilities and harassment.
2. Permanently re-open the Shrine
3. Create the necessary decree to establish and maintain The New Afrika Shrine as a National Heritage Site in recognition of the invaluable contribution made by the Kuti family to the cultural life of the nation.


To assist this process and make clear to the Nigerian authorities that the Kutis, for almost a century have enjoyed the respect and admiration of not just Nigerians or even Africans, but people of conscience around the world, please add your signature to this petition in support of this proposal, to be forwarded to the Governor of Lagos and to Nigeria’s Minister of Justice.

Ever hear a dope track and think to yourself, "I could make the nastiest remix with that track" ? Well, here's your big chance:

To celebrate the release of Tony Allen's new album Secret Agent, World Circuit Records are very excited to announce the Tony Allen remix project. World Circuit in collaboration with the good folks at SoundCloud and Propellerhead software are offering the opportunity to remix the title track from the album - 'Secret Agent' - a majestic slice of hardcore roots Afrobeat featuring a driving groove, penetrating guitar, pulsating horn riffs and stirring vocals. Simply put, one of the greatest drummers of all time is giving you the chance to get creative with his legendary beats.

Get all the necessary components here

Album Review: The Superpowers-Trance for Nation

Trance for Nation, The Superpowers new album released April 1, 2009 on Young Cub Records, wastes no time bringing the funk with a booming horn section balanced by the deep pocket of their groovtasticly funky rhythm section. The Superpowers achieve a perfect balance from top to bottom of the sound register--the guitars provide a link between the aggressive horns and intricate percussion. Claude and Rudy Gomis' voices glide over the richly textured ensemble as guest appearances for three tracks.

Trance for Nation showcases The Superpowers ability to play with dynamics. Within a single track they can sink and pulse into a deep groove, then push out of it into an up tempo progression, and sink back down again. On the whole, the album is very versatile alternating between sharp, aggressive tracks and deep relaxed tempo songs.

Connected is a slow deep groove reminiscent of Egypt 80 cuts like Look and Laugh or Beasts of No Nation. The title track, Trance for Nation, is also reminiscent of Egypt 80--the macabre drum beat, the open guitars, the sustained horn lines. Claude Gomis brings a perfect element to The Superpowers texture. The Superpowers cool guitars and tight horns mesh perfectly with Gomis' sly voice.

32 bit could be the best track on the album. It highlights the strength of The Superpowers sound--their ability to balance both aggressive and cool elements within a single track and achieve a duality of sound. Trance for Nation is composed of music the band has been performing live for months at clubs in Brooklyn, so the album incorporates their ability to accentuate dynamics and push the energy of the music during a live performance.

The Superpowers are a group of young musicians with a lot of potential. They represent the generation of young musicians using Afrobeat to push their sound. Much like Antibalas, Nomo, and Budos Band, they utilize afrobeat arrangements and instrumentation and use the word to form part of their identity, but don't limit themselves to any one genre or attribute their influences to one specific element.

The Superpowers play monthly at Zebulon, and are opening for Chico Mann on July 23rd at Southpaw. Trance for Nation is available on Itunes, and if you like what you hear, you'll be blown away when you see them on stage. 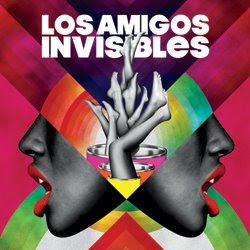 Comercial, Los Amigos Invisibles new album set to be released June 9, 2009 on, Nacional Records, is, as the name suggests, commercial yet still downright danceably funky. I challenge you to listen to the first three tracks of this album without dancing at some point. Already a radio hit across Latin America, the opening track, Mentiras, kicks you in the ass immediately. Los Amigos have a reputation for simply keeping it reliably funky, and they waste no time in pursuing that agenda on Comercial.

Make no mistake, the theme of the record is to be accessible. Comercial was a concept to which the band adhered when making the album. "The title of the album came out of a desire to make a more accessible record for even bigger crowds," commented Jose Luis Pardo, lead guitarist and primary songwriter. Los Amigos undertake a heavy touring schedule and have evolved as a band performing live. Their objective to make their music commercial is part of a larger mission to make people dance.

As if they needed any extra help in that end, they enlisted the help of several stars of the Latin-American music scene: Jorge Gonzalez (of Los Prisoneros), Natalia Lafourcade, Argenis Brito (Senor Coconut), and Los Tetas' C-Funk. If you've never heard of any of those people, or you love them all, you'll love this record. It's funky, it's simple, it will make you dance. If that's what you look for in your musical selection, Comercial will be available on Itunes and in record stores worldwide one week from today.