Antibalas Rocks Out at Governor's Island-August 8, 2007 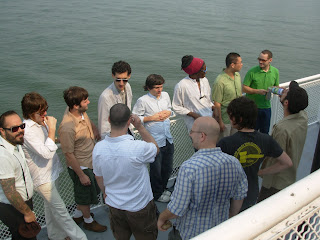 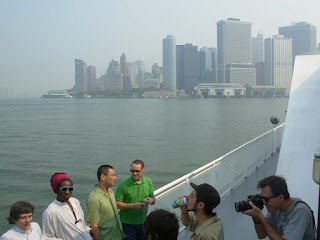 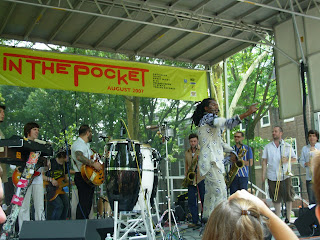 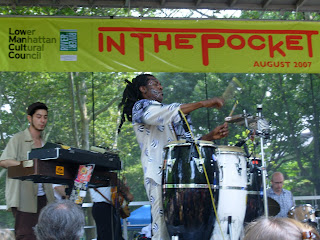 Antibalas, a band out of Buchwick, Brooklyn, proved why they are one of the most up-and-coming acts on the planet last Saturday at Governor's Island when they played to a lively crowd of several hundred people under the sweltering sun. The band released their forth album, Security, earlier this year to rave reviews and set out on a nation-wide tour thereafter. As if that was not enough, they went to Europe and played in Amsterdam, London, and Paris to name a few.
Antibalas is a twelve piece Afrobeat band styled in the tradition of Fela Anikulapo Kuti and Afrika 70. Fela is arguably the most legendary figure of African Music of the 20th century. He was a radical political icon in Lagos, Nigeria from the time he became famous in the 1970's until his death in 1997. His music was, and still is, immensely popular throughout West Africa and has become extremely popular throughout Europe and the United States. His music was so unique and original, he had to give it its own name, Afrobeat.
Much like Fela, Antibalas' music is known for its funky rhythmic backdrop facilitated by the guitars and bass, its hard driving horn lines played by the powerfully large horn section, its latin influenced percussions, and politically charged, anti-establishment message delivered through their song lyrics. The band members consist of Martin Perna–Baritone Saxophone and founder of the band, Amayo–Vocals, Congas, Victor Axelrod–Organ, Electric Pianos, Clavinet, Electric Celeste, Synthesizers, Eric Biondo–Trumpet, Stuart Bogie–Tenor Saxophone, Marcus Farrar–Shekere, Vocals, Marcos J. Garcia–Guitar, Vocals, Aaron Johnson–Trombone, Nick Movshon–Bass, Luke O'Malley–Guitar, Jordan McLean–Trumpet, Flugelhorn, and Chris Vatalaro–Drums.
Almost all of the band-members live in Brooklyn. Even Amayo, the band's lead singer, lives on Manhattan Ave. in Greenpoint although he is originally from Lagos, Nigeria. Amayo serves as the band's strongest link to Fela and his music. If the rest of the band members ever need any information about Fela they could not simply get from his music, they could ask Amayo as he grew up in the same neighborhood as Fela in Lagos and went to Fela's nightclub, The Shrine, on several occasions.
I had the privilege of sitting down with two of the band members for an interview before the show on Saturday, Martin Perna and Stuart Bogie. My first question was how their music has been received throughout their recent tours. Martin responded, "When we go to France and we do an interview, they bring a lot, like we dont have to explain anything. Here in the United States we have to explain our whole genre and our influences where it comes from, but if someone's playing hiphop or blues or rock, they just jump into it and ask. 10 years after we started playing this music, we just wonder when people are going to figure it out. Although on the other side of it, there is so much different music in the U.S."
I was curious as to who Martin and Stuart would call the band's biggest influences besides Fela. Stuart's response was not entirely surprising, "I think everybody likes different stuff in the group and it's real difficult to pinpoint any one thing. Our biggest influences are each other." I was also curious to see if they viewed themselves as the contemporary embassadors to Afrobeat, as many critics are giving them that label. Stuart responded, "Music's that's circulated all over the world, and re-issued, and inspires musicians all over the world doesn't need an ambassador. Fela made it, he called it Afrobeat." Martin also added, "I think maybe in a defacto way we have just because we have been playing the music for ten years, but it's nothing that we would ever request. It's something that someone else has to give you, and even then it's like a fruitcake or something. Like what do we do with this thing, nobody's going to eat it?"
Fela Kuti was not just a political figure through his music; he was an organizer, a national hero, and he actually ran for president at the height of his popularity under his own political party. I was curious if the band had any political aspirations of their own. "A lot of us are politically active outside the group in how we donate our money and projects we start," Stuart said. Martin added, "I'm doing that right now, I'm hoping to start the first bio-diesal factory in Brooklyn. We start construction in December, and we'll be in production by March. I used to teach at a high school in Williamsburg, and we did a lot of research on environmental racism and how there are higher incidences of asthma in the Greenpoint-Williamsburg area and a lot that has to do with truck traffic because a lot of trucks are burning diesel fuels. We just want to get other people involved because you can only do so much for the community."
Posted by Unknown at 7:45 PM