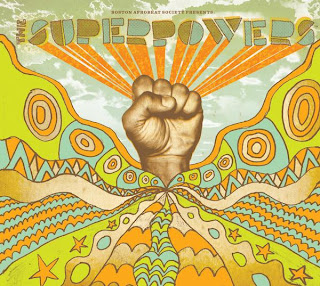 The Superpowers' 2007 release Revival Time is a groovtasticly aggressive Afrobeat album that will leave you dancing from start to finish. Presented by the Boston Afrobeat Society, this nine-piece Afrobeat ensemble is a burgeoning group on the cusp of an even hotter Afrobeat scene. Their nine track release is a tightly arranged pulsing Afrobeat monster fit to be named "super."
The Superpowers are all graduates of New England Conservatory where they came together under the leadership of Adam Clark, the band's drummer and founder. They started playing Fela Kuti tunes and found the Afrobeat medium to be an amazing new medium through which to express themselves as jazz musicians.
While the Superpowers are definitely an Afrobeat band with an aggressive Afrobeat sound, they incorporate elements of several musical styles including jazz, funk, soul, reggae, and rock. Their horn section delivers lines one would expect to hear from Earth Wind and Fire or the JB's over pulsating Afrobeat grooves laid down by their proficient rhythm section. Their guitars and keyboards incorporate the perfect amount of distortion effects to add a psychedelic rock/dub feel.
What's really great about Revival Time is the range the album encompasses. There are slower smooth tracks like "Cosmic Spiral" and "Moonlit Heart" to chill you out, more upbeat lively tracks like "Abbey Rockers #1" and "Abami Eda" to make you dance, and more unconventional, unique sounding tracks like "Revival Time" to give you something you haven't heard before.
What's best about Revival Time is the extent to which it exposes and accentuates the influences and components that led Fela Anikulapo Kuti to create the genre, particularly the American elements of funk and jazz. The rhythm guitar lines are extremely funky as well as the horn lines, but at the same time, the keyboard and horn solos are extremely jazzy. A lot of Afrobeat bands will prioritize staying true to the Afrobeat tradition. The Superpowers aren't afraid to deviate from the accepted Afrobeat sound, and that allows them the freedom to develop a much more unique and interesting sound.
Half the Superpowers live in Boston and half live in Brooklyn, so they play a lot of shows in both cities. They tour most of the northeast hitting cities like Providence, RI, Burlington, VT, Northhampton, MA, and stops in between. Their sound is growing, and so is their fanbase as they are at the forefront of a booming Afrobeat scene. Bands like Antibalas and Akoya are spreading Fela's message, and The Superpowers can hang with any Afrobeat band on the scene. Their horns are tight, their rhythm section rocks, and their attitude and sensibility set them apart from the rest.
Posted by Unknown at 8:26 PM